Technologies for promoting the efficient use of extracted energy.

To make effective use of all of the energy that is produced, a gas turbine cogeneration system extracts not only electricity or power by means of a gas turbine, but also the waste energy produced as heat via a heat fluid, for example.
This system makes effective use of energy by producing it in multiple forms (electricity and steam) from a single energy source (fuel). It also uses a gas turbine as a driving force for reducing CO2 emissions and the environmental load in general. 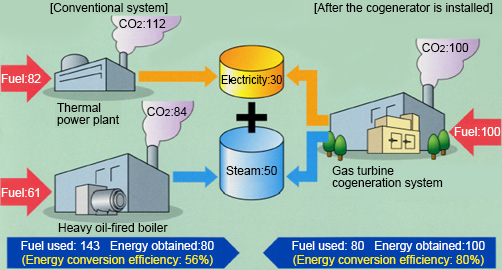 Example of the effects of adopting gas turbine cogeneration

Microgrid Stabilization Technology Based on GIGACELL

Increasingly popular as a countermeasure against global warming, power generators that run on solar, wind and other natural energy resources produce variable amounts of power. Such fluctuations must be absorbed and stabilized.
In light of this, KHI is developing technologies to produce natural energy power generation microgrids that are suitable for the relevant area by using GIGACELL®, the company's large-capacity reserve cell that is capable of rapid charging/discharging.