Just like a diesel or gasoline engine, a gas turbine is a type of internal combustion engine and operates using the cycle of intake, compression, combustion (expansion) and exhaust. One major difference, however, is that the basic movement. A gas turbine is rotary movement, in contrast to the back-and-forth movement of a reciprocating engine.

The basic principle of a gas turbine is as shown in the diagram below. First, air is compressed by a compressor, and this compressed air is guided into the combustor. Here, fuel is continuously combusted to produce gas at high temperature and pressure. What a gas turbine for industry does is the gas produced in the combustor is expanded in the turbine (a vaned rotor made by attaching multiple blades to a round disk), and as the result, the rotational energy, which operates the compressor at the previous stage, is produced. The remaining energy is delivered with an output shaft. 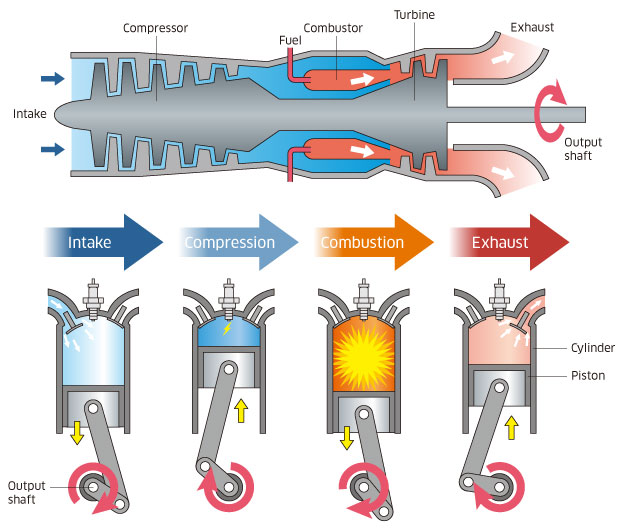 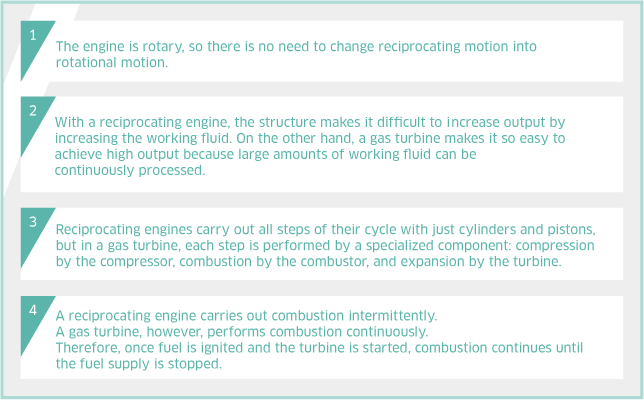 Types of gas turbines based on structure and function

This is the most basic type of gas turbine for obtaining thrust using a jet flow, and the simplest in terms of structure.
This engine is suitable for aircraft which fly at high speed, and is used in supersonic airliners and jet fighter planes.

With this type, a separate turbine is placed after the turbo jet engine, and this turbine operates a large fan at the front of the engine. This fan increases the air flow rate and boosts thrust.
This type has a low noise level, and low fuel consumption at subsonic speeds, so today this type of gas turbines is used almost exclusively as airliner engines.

This gas turbine delivers output as rotational force, and the turbine and compressor are coupled by a single shaft. Part of the turbine output is used to drive the compressor, and the remainder is delivered to the output shaft.
This type is suitable for applications, such as alternator drives, requiring rotation at constant speed.

In this type, a separate turbine is placed after the gas generator turbine, and the energy of the jet blast is delivered as rotational force. This rear turbine is called the power turbine. Since there is no mechanical coupling between the power turbine shaft and the compressor shaft, it is possible to select any output rotation speed. This is suitable for driving equipment with a wide range of rotation speeds.
This type is widely used in propeller planes and helicopters, and in applications such as pump/compressor drive, ship main engines, and generator drive.

What is a GREEN Gas Turbine?

It is the principle of Kawasaki gas turbines we have been following, since the development in 1972 of our first gas turbine, which allowed us to offer more satisfying service to our customers by achieving more efficient use of energy and helping to protect the environment. The thought we put into our products has been highly rated by the world market, and we have built up a track record of manufacturing over 10,000 units (as of the end of March 2014, figure based on the number of engines) as drive sources for standby generator equipment and cogeneration systems.
Kawasaki gas turbines have been very successful, and we have given these products the new name "GREEN Gas Turbines" so that we can embrace this principle even more. 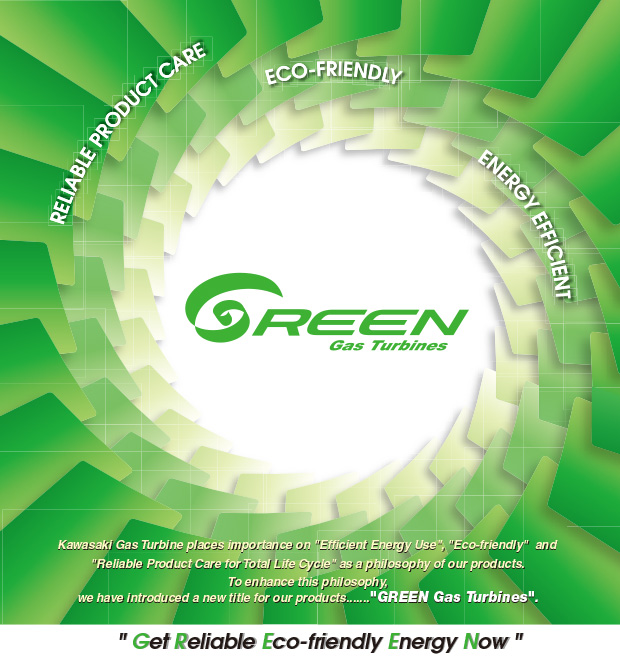