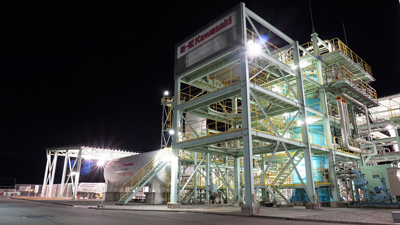 Hydrogen Liquefier for the demonstration operation

Tokyo, June 10, 2020 - Kawasaki Heavy Industries, Ltd. announced today that it started selling of the hydrogen liquefier which was the first developed by made-in-Japan technologies with industry-leading liquefaction efficiency.

Hydrogen is a clean energy that does not generate greenhouse gases when used as a fuel for power generation or fuel cell vehicles etc., and is expected to be used about 300,000 tons per year※1 around 2030. Focusing on the property of hydrogen, which becomes 1/800 in volume by liquefying at minus 253°C, Kawasaki engaged in research and development of liquefaction technology.

The hydrogen liquefier has demonstrated its performance and reliability through continuous demonstration operation for over 3,000 hours and various functional tests carried out until this spring.

The main features are as follows;

By promoting the further spread of hydrogen energy while helping to eliminate CO2 emissions in pursuit of sustainable development goals (SDGs), Kawasaki hopes to contribute to a future characterized by enriched, prosperous lifestyles and a healthy global environment.