Made entirely in Japan with Kawasaki's proprietary technology, the hydrogen liquefaction system has been installed in Kawasaki's Harima Works in Hyogo Prefecture. The system has the capacity to liquefy about five tons of hydrogen per day. It is mainly comprised of a hydrogen liquefaction machine and a tank specially designed to store liquefied hydrogen. In developing the system, Kawasaki harnessed the strength of its proprietary, homegrown technologies, including its cryogenic materials handling technology as well as the technological turbine expertise it has gained through the development of high-speed rotary machines.
To produce liquefied hydrogen, the system employs a liquefaction machine that cools compressed hydrogen gas and hydrogen that has been pre-cooled via a refrigeration cycle through a heat exchange process. Having confirmed that the system successfully produced liquefied hydrogen during its post-development trial run, Kawasaki will shift to the performance evaluation test phase.

Kawasaki will test the system's performance, reliability, maintainability, etc. and make technological improvements with an eye to commercialization. Aiming to get a leg up on the competition in the hydrogen infrastructure market, Kawasaki will also work on developing a larger, more efficient liquefaction system to promote widespread use of hydrogen energy.

Dubbed the ultimate clean energy, hydrogen is expected to become a primary source of energy in the future. Now that fuel cell vehicles are scheduled to be launched in the market by the end of this year, use of hydrogen is expected to dramatically increase. It will take building efficient transportation and storage systems to bring a large amount of hydrogen to the market. When liquefied, hydrogen is reduced to approximately one eight-hundredth of its volume. It can be returned to high-purity hydrogen gas simply via evaporation. Kawasaki is leveraging these properties of hydrogen to build a hydrogen supply chain geared mainly to liquefied hydrogen.

Moving ahead with an eye to bringing an ample amount of hydrogen to the market, Kawasaki is working to develop and commercialize the infrastructure technologies needed to build a complete supply chain, ranging from production to transportation, storage, and use of hydrogen. More specifically, in addition to the hydrogen liquefaction system that is the key to unlocking the passageway to mass transport and storage, Kawasaki is moving forward with developing and commercializing a liquefied hydrogen carrier and storage tank as well as a hydrogen fuel-driven gas turbine, and more.

Kawasaki will realize the widespread use of hydrogen energy as part of its commitment to working as one for the good of the planet.

Composition of the hydrogen liquefaction system 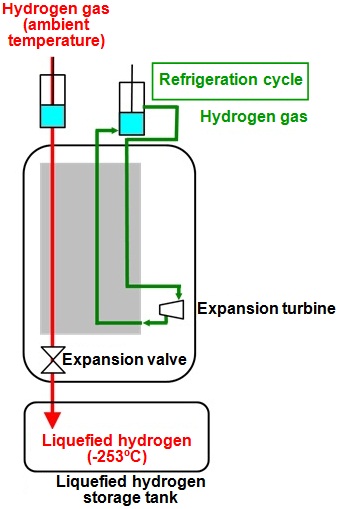