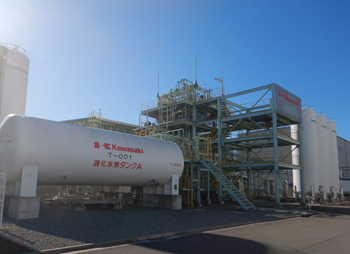 Tokyo, December 5, 2019 — Kawasaki Heavy Industries, Ltd. announced today the start of verification testing at Harima Works using a new type of hydrogen liquefier, with the aim of future commercialization. The new hydrogen liquefier achieves an approximate 20% improvement in liquefaction efficiency compared with the previous one developed by the company in 2014, and delivers industry-leading performance. Verification testing will entail continuous operation of the liquefier until May 2020 (liquefying about 5 tons per day), after which confirmation of commercial-level performance will be made and sales activities commenced.

Hydrogen is a clean-energy fuel that does not emit greenhouse gases, and its use as a fuel for power generation, fuel cell vehicles and other purposes is expected to spread. The Japanese government has set a target of reducing domestic CO2 emissions by 26% by FY 2030 (compared with FY 2013 levels), and efforts are being made to promote the spread of hydrogen energy use in order to help achieve this target and realize a hydrogen society. The 2017 Basic Hydrogen Strategy, a shared strategic scenario released jointly by relevant government organizations, lays out a roadmap aimed at procuring approximately 300,000 tons of hydrogen annually by the 2030s.

This original system uses a liquefier to carry out heat exchanges between the hydrogen feed gas—compressed hydrogen gas—and hydrogen pre-cooled through a refrigeration cycle in order to cool the hydrogen feed gas, and can produce approximately 5 tons of liquefied hydrogen per day. The new liquefaction system operates on the same principles, but Kawasaki has made improvements to the liquefaction process along with efficiency-boosting design revisions, resulting in an overall liquefaction efficiency improvement of about 20% as well as a cost-cutting 30% reduction in equipment weight. Based on the new hydrogen liquefier, the company plans to release a new line of systems with capacities reaching as high as 25 tons or so per day. Kawasaki's verification-testing equipment will be used to confirm performance reliability, equipment durability and other factors in preparation for commercial release, and various data gathered through the liquefaction processes will be utilized in the development of even larger systems in the future.

Ever since its installation of Japan's largest liquefied hydrogen storage tank at the Tanegashima Space Center, Kawasaki has handled its operation for more than 30 years. Leveraging this experience as well as its technological strengths in the area of liquefied natural gas (LNG), which include transport and storage technologies cultivated through the construction of LNG carriers, LNG storage facilities and more, Kawasaki plans to offer customers all-encompassing proposals covering hydrogen liquefaction, transport, storage and other operations.

Furthermore, the company will continue its technological development and commercialization efforts, comprehensively targeting both upstream and downstream supply chain stages, in order to provide liquefied hydrogen carriers, large liquefied hydrogen storage tanks, gas turbines capable of generating electricity on 100% hydrogen fuel, and other products aimed at the realization of a hydrogen society. By promoting the further spread of hydrogen energy while helping to eliminate CO2 emissions in pursuit of sustainable development goals (SDGs), Kawasaki hopes to contribute to a future characterized by enriched, prosperous lifestyles and a healthy global environment.

Among available gases, hydrogen is the lightest and has no toxicity, odor or global warming impact. Because it offers maximized calorific value per unit of weight, hydrogen has been used as rocket fuel and in other applications for more than 30 years. Recent applications include usage in fuel cell vehicles. Hydrogen liquefies at –253°C, and its liquid form has 1/800 the volume of its gaseous form. Furthermore, liquefied hydrogen has a high purity exceeding 99.999%, meaning that vaporization alone following transport is sufficient to prepare it for use in fuel cells, power generation and other applications.