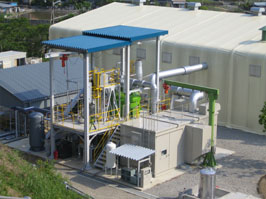 Tokyo, July 13, 2010 — Kawasaki Plant Systems (K Plant) announced today that it has completed testing of its proprietary woody biomass gasification power generation and pellet production systems for a project overseen by the New Energy and Industrial Technology Development Organization (NEDO) in Niyodogawa, Kochi Prefecture. The testing was conducted over a three-year period beginning in April 2007.

During testing, K Plant verified the durability and environmental performance of the plant facilities while making improvements to help optimize and automatize operations. The test plant has been in continuous operation, supplying 150 kW of electricity via the woody biomass gasification power generation system. Producing 600 tons of wood pellets a year, the pellet production system has been a steady source of heavy fuel oil for four local area facilities. K Plant has clearly demonstrated that the plant can cut some 800 tons of CO2 emissions annually through the use of biomass energy. While testing under the NEDO project is completed, the municipal government of Niyodogawa will continue to operate the woody biomass gasification power generation and pellet production systems for its own biomass project.

The plant’s fluidized bed gasifier converts woody biomass into gas via thermal decomposition at a low temperature of approximately 650°C. The generated gas (CO and H2), which contains a large amount of tar, is sent to the gas turbine combustor at the same constant temperature and pressure to generate electricity. It’s an extremely effective use of the tar which would normally have to be removed or decomposed since it’s impossible to process by conventional means. Thanks to these features, the plant is three times more efficient at generating power than direct-combustion steam turbine power generation systems of the same size and can be applied to small-scale woody biomass systems.

Kawasaki Heavy Industries and K Plant had been working from fiscal 2007 to 2009 on a prefectural afforestation project under a three-year sponsorship agreement with the Kochi prefectural and Niyodogawa municipal governments. The two companies have decided to renew the agreement this fiscal year. Under the project, Kawasaki will provide funding for tree thinning and forest road construction projects in Niyodogawa that are designed to cut CO2 emissions. Kawasaki is also working to build bridges with communities by making local tree thinning projects part of its employees’ regular training program. As a project sponsor Kawasaki continues to support Niyodogawa’s efforts to become energy self-sufficient and revitalize local communities through the effective use of forest residue and thinned wood.

Kawasaki is helping to build a sustainable society through the development and application of technologies and systems that reduce emissions and make efficient use of untapped, renewable energy sources, such as biomass, wind and solar power.