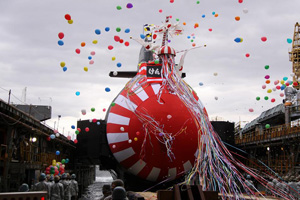 Tokyo, November 15, 2010 — Kawasaki Heavy Industries, Ltd. today held a ceremony marking the launch of the submarine Kenryu, which was built for the Japan Ministry of Defense (MOD) at its Kobe Works first dock at 11:20 AM. The ceremony was attended by a delegation of top JDA officials.

The submarine is the forth Soryu class submarine built by Kawasaki, and the 25th built at this shipyard after World War II. It provides superior submerged operations and propulsion performance, and uses high tensile steel for its hull. It also has Stirling engines for increased underwater endurance, a variety of automated systems, improved surveillance capabilities using high-performance sonar, increased stealth capabilities, and enhanced safety measures.