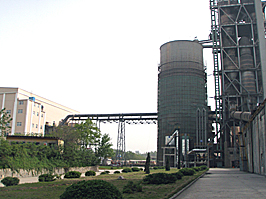 Tokyo, May 25, 2010 — Kawasaki Heavy Industries, Ltd. announced today that Anhui Conch Kawasaki Engineering Co., Ltd. (ACK), a joint venture between Kawasaki Plant Systems, Ltd. (K Plant) and China's Anhui Conch Group, was nominated by the United Nations Industrial Development Organization (UNIDO*) for its BlueSky Award. The nomination is in recognition of the environmental design and energy efficiency of ACK#39;s Conch Kawasaki Kiln (CKK) System. In conjunction with the nomination, a presentation about the CKK System will be held on May 26, 2010 during a special event at the Shanghai Expo.

UNIDO gives its BlueSky Award to cutting-edge developments in the field of renewable energy that demonstrate the highest potential investment value for emerging economies. ACK's state-of-the-art CCK System has been nominated as a technological innovation that raises the bar for standards of environmental sustainability and energy efficiency around the world.

The CCK System is designed to make refuse less polluting, less bulky, and more recyclable. It#39;s an innovative system that integrates cement manufacturing with waste processing by incorporating municipal refuse incinerators into existing cement plants. Using the gas and char produced by waste incinerators as fuel to run a cement manufacturing plant, the system is able to reduce overall fuel consumption by approximately 5% to 20% and as a result cut greenhouse gas emissions by 160,000 tons (CO2 equivalent) annually. Since high temperatures reduce pollutants during the cement firing process, dioxins and other toxic byproducts from the waste treatment process do not require any dedicated treatment facilities, thereby reducing construction costs to approximately one tenth that of conventional waste treatment facilities in Japan.

The CKK System is a lean, green revolutionary innovation combining the waste treatment and cement plant technologies that K Plant has refined over the years with the cement plant operational know-how of its joint venture partner, Conch Cement. ACK is currently building a 600-ton/day model waste treatment system (two 300-ton/day incinerators) at one of Conch Cement#39;s production plants. The first stage of construction (a 300-ton/day incinerator) has been completed and trial operations are underway ahead of commercial operation. ACK is actively looking into further applications for the CKK System in the face of a growing need for sludge treatment in China and around the world. K Plant and ACK are leading the way toward creating a greener and more efficient industry standard that will have a lasting positive impact on the global environment.