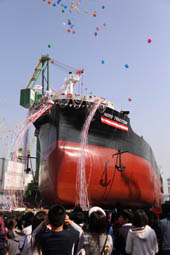 The 189.9 m vessel has a flush deck with forecastle and five holds that are designed for optimum transport of grains, coals, ores and steel products. A new proprietary bow designed to reduce wave resistance allows the ship to operate with less fuel. Four 30 ton deck cranes are installed in the center in between hatch covers to enable cargo loading and unloading in ports where no cargo handling facilities are available.