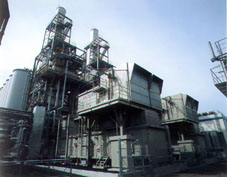 In July 2004, Kawasaki delivered a combined cycle power plant for an on-site power and heat production project that Sumitomo Corporation is conducting at Chiba Food Complex in Japan. The 50MW plant makes use of L20As, 20MW-class gas turbine generators newly developed based on Kawasaki’s proprietary technology, and this is their first commercial installation. This full turnkey order was received in October 2003.

In this project, Summit Mihama Power Corporation, a wholly owned subsidiary of Sumitomo, supplies several plants constituting the Complex with electricity and steam, as well as selling a portion of the generated power to Summit Energy Corporation, a power retailer.

The power plant for this project consists of two high-efficiency gas turbine L20A generators, two heat recovery steam generators, one steam turbine and several through flow boilers. Heat recovery steam generators are high-efficiency combined pressure boilers and the steam turbine is a mixed pressure steam turbine. Optimal combination of this equipment with the L20A enables flexible handling of changes in power and heat demand from the respective companies of the Complex and Summit Energy. Consequently, the total energy efficiency improved remarkably and dramatic effects are demonstrated in CO2 reduction.

A major characteristic of this project is the combination of supplying of electricity and steam to several plants of the Complex and the electricity retailing business, rather than the conventional internal consumption by one company (one plant). This is an entirely new structure in Japan using a 50MW-sized power plant. Although introduction at a single plant cannot fully utilize the merits of distributed power generation, employing this structure enables the capability of the power facility to be demonstrated to the fullest. Based on this, the structure is expected to be more widely applied hereafter in distributed power generation.