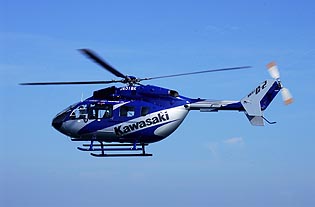 In July 2004, Kawasaki received an order from Hyundai Motor Company for the latest model Kawasaki BK117 C-2 helicopter to be used in Chung Cheong Buk-Do in South Korea. This is the first overseas order for the C-2 helicopter. After delivery in March 2005, the C-2 will be assigned to the Chung Cheong Buk-Do Fire Department Headquarters to be used in fighting fires. The helicopter is equipped not only with automatic pilot but also with a fire fighting tank, rescue winch and rapelling kit and such for fire fighting.

The Kawasaki BK117 helicopter was developed jointly between Kawasaki and European helicopter maker Messerschmitt-Bolkow-Blohm (MBB; presently, Eurocopter Deutschland (ECD)). It is a medium-sized twin-engine helicopter used for multiple purposes including transporting cargo and people, fighting fires, and as a police and medical (emergency medical service) helicopter. The helicopter also boasts superior safety and operability, a compact body form, and large double doors in the back of the body appropriate for transporting long objects such as stretchers. The helicopter is highly popular and in addition to the 139 orders received by Kawasaki (as of June 2004), ECD has received 331 orders (as of December 2003) for a total of 470 helicopters ordered.