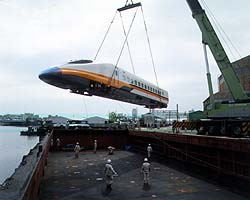 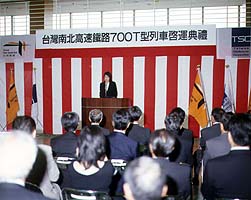 Following train car manufacturing and a range of tests continuously conducted after the rollout ceremony held in January 2004, the first train of the 700T for Taiwan High Speed Rail is now complete and the first shipment was recently made from our Hyogo Works.

In mid-May, the 12-car train was delivered to the Port of Kobe from the quay of Hyogo Works via a barge and then loaded on a heavy cargo ship owned by Mitsui O.S.K. Lines, Ltd., Poseidon Triumph. On the 18th, a celebration was held at the Port of Kobe to commemorate the first loading, where Taiwan High Speed Rail Corporation Chairwoman Nita Ing, Taiwan Shinkansen Corporation Chairman Kazuo Sato and many other related parties were in attendance.

The train left the port for Taiwan the next day, arrived at Kaohsiung on the 24th and delivered to the rail yard located at Yenchao the following day. Events are also being conducted in Taiwan. The train will undergo inspection as well as various tests, and test runs are scheduled to start in October 2004.