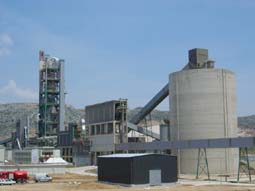 Kawasaki has completed and handed over a cement plant for Lafarge Ciments S.A.’s newly built cement factory in Tetouan, Morocco. This plant marks the Kawasaki’s first delivery of a cement plant in Morocco. An inauguration ceremony of the factory was held at the site on May 28.

The factory was newly built to replace the existing Tetouan cement factory at which production has stopped. With a production capacity of 2,300 tons per day, the new facility will meet the growing cement demand in Morocco, and the modernized facilities incorporating latest technological advances will greatly contribute to reduce environmental burden in the region. The scope of work for Kawasaki was delivery of the main processing equipment (raw mill, coal mill, kiln and cement mill), onsite construction and test runs.

Lafarge Ciments is a subsidiary of Lafarge Maroc, which is a joint venture between Lafarge Group, the world’s largest cement producer, and Omnium Nord Afrique (ONA), the largest private company in Morocco. In April 2002, Kawasaki received a contract from Holcim (Maroc) S.A., a local subsidiary of Holcim Ltd., the world’s second-largest cement producer, for a cement grinding, storage and shipping facility, which is now under test runs. These two contracts with the world’s two major cement companies, as well as their actual secured delivery, are a major step forward for the global expansion of Kawasaki’s cement plant business.