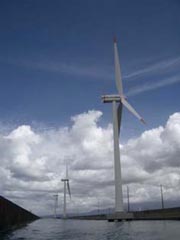 In March 2004, Kawasaki delivered a large wind power system with a rated output of 16,000kW to Summit Wind Power Sakata Corporation, a wholly owned subsidiary of Sumitomo Corporation. This large wind power system effectively utilizes the canal (about 50m wide) on the west shore of Sakata-kita Port in Sakata City, Yamagata, Japan and consists of eight units: five turbines that have their foundations on the canal (a first in Japan), and three turbines located on the neighboring Miyaumi Coast. Further, the wind power system employs the V80-2.0MW turbines with the nation’s largest generation power output for a single unit of 2,000kW, manufactured by Vestas Wind Systems A/S (Denmark).

The turbines have a hub height of about 60m and a rotor diameter of 80m. Pitch control has been implemented to enable the maximum generation of power to be achieved with wind speeds of 4-25 meters/second as well as Optispeed™ to limit fluctuations in generation power caused by rapid wind changes to provide stable generation power.

The entire generated electric power will be sold to Tohoku Electric Power Co., Inc. and provide about 30% of the annual electric energy needs for every household in Sakata City.

*Optispeed™
Optispeed™ is a variable speed drive control system that utilizes a converter. Although the variation range of rotating speed was traditionally 10%, it can now be varied up to 60% with Optispeed™, realizing the most economical power generation efficiency.