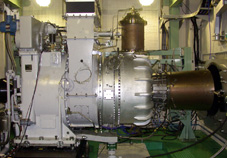 In December 2003, Kawasaki developed two models of standby gas turbine generator sets that have one of the largest outputs in Japan. The company aims to deliver the first set by the end of March 2005, and will continue to make proactive marketing efforts with telecommunications companies, water/sewage system organizations, and other customers who require large power capacity.

Because of the superior features of gas turbines – reliable start, no cooling water and clean exhaust gas – these sets are used widely for standby power at telecommunications and data centers, and for emergency power at public facilities such as water/sewage plants, hospitals and government buildings. With the increased focus on securing power in times of emergency, following the Kobe Earthquake and the recent New York City blackout, the significance of having standby generators has been reaffirmed and demand is rising accordingly.