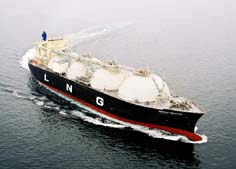 The first half of this fiscal year (from April 2003 to September 2003) saw Kawasaki Shipbuilding deliver six new vessels with a total of 250,000 GT. These were two LNG Carriers, two LPG carriers and two bulk carriers

These newly delivered vessels included the following:
Orders received for the first half of this fiscal year came to ten carriers consisting of one LNG carrier, one very large crude carrier (VLCC) and eight bulk carriers to give a total of 590,000 GT.