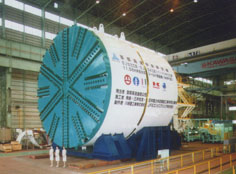 Kawasaki has completed the construction of a slurry shield machine (articulation type) with a diameter of 11.56 m at the Harima Works for the Tobishima/Sumitomo Mitsui/JDC Joint Venture. The machine will be used in the construction of a tunnel between West-Shinjuku and Honcho on the Central Circular Shinjuku Route which the Metropolitan Expressway Public Corporation is currently constructing.

The slurry shield machine uses a directional control system (flex system) by controlling shield jack pressure. By placing a control valve to adjust the pressure of each jack to the machine, the offset load on segments is reduced more than conventional directional control by jack selection raising directional accuracy. Use of an articulation system also allows the machine to tunnel curves at a minimum radius of 270 m.

The Central Circular Shinjuku Route where the slurry machine will be used is a new eleven-kilometer expressway being built almost entirely underground with completion scheduled for fiscal year ending March 2007. The route will ease movement between the three major centers of Shibuya, Shinjuku and Ikebukuro and go a long way to alleviate severe traffic congestion on Tokyo expressways which currently employ a one-point-focused network.

Kawasaki possesses a 30 percent plus market share, the largest in Japan, for large shield machines with a diameter of over 10 m. The company has much experience producing tunnel boring machines (TBMs), especially internationally with Kawasaki making TBMs for the Eurotunnel and in Japan where Kawasaki shield machines were used for the Tokyo Bay Aqua-line and the Kanda River Water-regulation reservoir project.