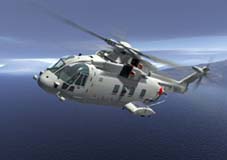 In July, the Japan Defense Agency (JDA) awarded Kawasaki the position of prime contractor to manufacture the airframe and engine of the EH101, a helicopter to be used by the Japan Maritime Self-Defense Forces (JMSDF) for Airborne Mine Counter-Measures (AMCM), transportation and for Antarctic transport support operations.

The JDA will place an order for one EH101 in this fiscal year with another 13 anticipated to be ordered over 10 years; 11 for AMCM, transportation and three for transportation support in Antarctica. Delivery of the first EH101 is scheduled for the end of fiscal year ending March 2006 and Kawasaki is gearing up for production.

The EH101 is a midsize helicopter jointly developed by Westland of the U.K. and Agusta of Italy (currently merged as AgustaWestland) with three engines for long range, improved safety and high capacity. Automatic folding main rotors and tail boom make the EH101 ideal for use aboard seagoing vessels. The superior rotor and avionics systems also add to the helicopter’s reliability and ease of maintenance. The multipurpose EH101 with proven capability and performance is used internationally in versatile missions including transportation, search and rescue, antisubmarine, and early airborne warning.