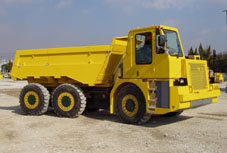 Kawasaki has developed the KUT300 (3 axle, 6 wheeled, 4 wheel drive), a 30 ton class dump truck for use in tunnel construction, and began sales in April. The first vehicle was delivered to Okumura Corporation in May.

The KUT300 is an environmentally friendly dump truck that has cleared the secondary standards for exhaust gas to be implemented by the Ministry of Land, Infrastructure and Transport in October 2003. The vehicle’s engine is the greatest in its class with an output of 212kW, while the vehicle’s dimensions and turning circle are the smallest in its class, allowing greater mobility inside construction tunnels.

Kawasaki produces and sells a “two-sided dump truck” that uses a modification of a wheel loader bucket to be able to rotate left and right. This vehicle has been used as a loader in tunnel construction until now. The addition of the KUT300 to the product lineup provides the best solution on the market for the smooth loading and transport of rock and gravel produced in tunnel construction.

The first vehicle delivered in May is being used in the eastern section of the Hokuriku Shinkansen Mineyama Tunnel, utilizing its high mobility within the tunnel to efficiently carry rock and gravel.