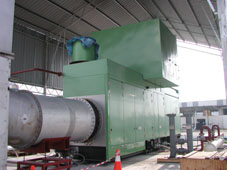 The GPB70D that have been completed are to be installed in the district cooling plant in Precinct 2 of Putrajaya during the second, third and fourth phases of its expansion project. The state-of-the-art plant, which is one of the largest cooling plants in the world, will use the gas turbine generator sets as a cogeneration facility in combination with exhaust heat recovery boilers. Kawasaki was awarded the contract for the plant last May as a full turnkey project by Gas District Cooling, a subsidiary of Petronas Company in conjunction with Kawasaki’s local dealer, Tractors Malaysia (TMB).

Kawasaki provided core components of gas turbine generator sets from Japan, such as gas turbine engines, generators and control panels, while other components such as acoustic enclosures and skids were procured locally. The packaging of GPB70D was conducted jointly by KGA and TMB in Malaysia based on Kawasaki technology. This is the first roll-out of Malaysian packaged and tested gas turbine generator sets utilizing Kawasaki know-how. It will provide Kawasaki with a great advantage in future operations in Southeast Asia which is seen as key to company strategy.