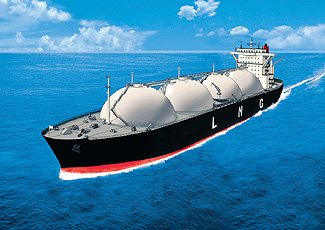 Kawasaki has received a string of domestic and foreign orders for its large LNG Carriers. Four new orders have been received this fiscal year, bringing the total order backlog to six. The carriers will be built at the Sakaide Works in Kagawa Prefecture, with deliveries scheduled over the period from 2003 to 2006.
Kawasaki's 145,000 m3 LNG carrier boasts the largest cargo capacity in the world, 10,000 m3 (7 percent) larger than conventional carriers. However, it burns the same quantity of fuel oil, due to the fine hull form and improved propulsive performance.
As the first Japanese shipbuilder of LNG Carriers, Kawasaki has earned a reputation with ship owners for its many years of expertise, technological innovation and versatility in the field, a fact reflected by this latest series of orders.