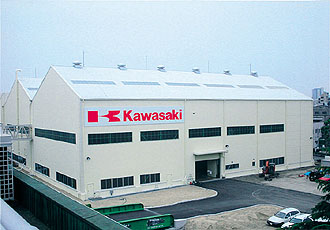 Kawasaki has completed construction of a new rolling stock parts plant within its existing Hyogo works, which is the hub of Kawasaki's rolling stock operations.
Located to the west side of the complex on a 12,000 m2plot of land separated by a waterway, the new plant occupies an area of 6,500 m2. It will manufacture such railcar parts as doors, small electric components and piping, as well as ventilation systems.
The new plant enhances competitiveness and promotes brand differentiation by bringing in house the manufacture of some parts that were previously manufactured by third parties. The sale of competitive parts and products manufactured internally also presents a new business opportunity for Kawasaki's rolling stock operations.
The plant has boosted rolling stock productivity because it features a proprietary just-in-time KPS (Kawasaki Production System) line that integrates the manufacture of parts and equipment previously dispersed throughout the Hyogo Works.