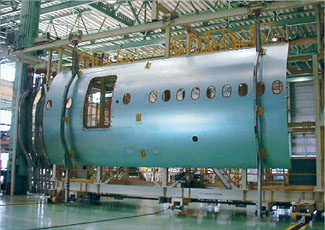 Kawasaki started delivery in July of fuselage panels for Boeing's new 777-300ER (extended-range) aircraft, the latest addition to the Boeing 777 series of passenger planes. Major assembly work got under way in Washington, U.S.A.
Kawasaki has played a key role since 1991 in the international consortium that developed the series, manufacturing the forward and center fuselage panels, center wing substructures, cargo doors and pressure bulkhead and other parts. Kawasaki has shipped components for 422 of the 777s to date, with the latest delivery of a forward fuselage panel marking the 423rd.
The Boeing 777-300ER is the fourth model in the 777 family, following the 777-200, the 777-200ER and the 777-300. Six airlines, including Japan Airlines, All Nippon Airways and Air France, have already placed orders for 46 of the new extended-range planes. The 777-200's fuselage was extended in the 300 model in order to boost seating from 305 to 365 passengers. The new 777-300ER surpasses the flight range of the 777-300 by approximately 1,255 nautical miles (2,324 km), to a total of 7,250 nautical miles (13,427 km), but allows for up to 365 seats in a typical three-class configuration.
The 300ER's first flight is scheduled for early 2003, with the first delivery to commercial airlines to take place in March 2004.