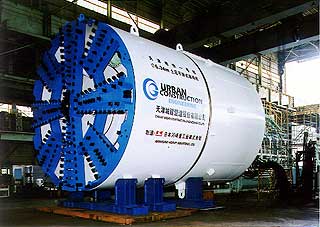 Kawasaki has completed an earth pressure-balanced shield machine for use on the Tianjin Metro Line No. 1 Extension Project in China, at its Harima Works.

Kawasaki and Shinsho Corporation jointly received the order for the shield machine from Tianjin Foreign Trade (Group) Co., Ltd. at the end of last year. Kawasaki completed construction of the machine, which is 6.34m in diameter, at its Harima Works in July. It is supplying engineers to oversee the installation and provide client training.

The machine will be used to excavate an additional underground section (approximately 2,800m two ways) of the No. 1 Line currently being constructed by Tianjin city, southeast of Beijing.

The shield machine injects chemical additives into the excavated earth, giving it moldable properties. The earth then fills out the cutter chamber, effectively stabilizing the cutting face. The machine is equipped with an automated tunnel guidance system for ultraprecise excavations.

The Tianjin project marks Kawasaki's third shield machine contract in China, where mid- to long-term demand for the machines is expected to remain stable. Subway construction is planned for large cities including Shanghai, Guangzhou and Beijing, which is hosting the Olympic Games in 2008. There are also other largescale civil engineering projects planned, including a water diversion project on the Yangzte River.