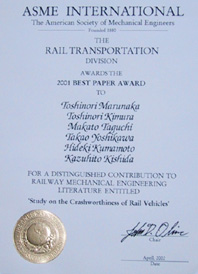 Kawasaki has become the first Japanese corporate recipient of the Best Paper Award for the 2000/2001 year, bestowed by the American Society of Mechanical Engineers' (ASME) Rail Transportation Division. The paper, Study on the Crash-worthiness for Rail Vehicles, was presented at the ASME/IEEE Joint Rail Conference in April 2001.
Kawasaki accepted the award at this year's Joint Rail Conference in April in Washington, D.C. The annual meeting, jointly organized by ASME and the Institute of Electrical and Electronics Engineers (IEEE), is always held at a venue in North America.
The paper, focusing on the R142A subway cars for which Kawasaki received an order from the New York City Transit Authority (NYCTA) in 1997, provides analyses of tests on the railcars' structural capability to absorb the energy of a collision while securing the safety of both passenger and crew spaces.
A single-vehicle collision experiment was needed to determine whether the R142A carbody structure was capable of absorbing energy and withstanding the reaction force, and highly sophisticated analysis was also required, as well as a consistency of analytical results with experimental results. In January 1999, Kawasaki carried out the first ever single-vehicle collision test in Colorado, U.S.A., and demonstrated the consistency between the results of analysis and the experiment with very high accuracy. This achievement assisted in the design and development of railway vehicles with greatly enhanced crashworthiness.