Liquid Phase Combustion of Dimethyl Ether a First in Japan 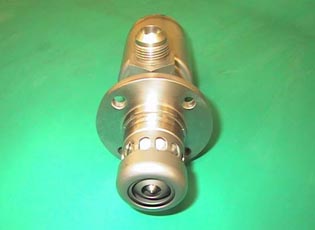 Kawasaki has succeeded in the first liquid phase combustion (combustion of sprayed liquid) of dimethyl ether (DME) in Japan, using its own combustor for the M7A model of 7 MW gas turbines. DME, synthetically produced from natural or other gas, is a liquefied gas with physical properties similar to those of liquefied petroleum gas (LPG). It has attracted notice as a promising fuel for the next generation.
Since 1999, Kawasaki has been committed to the development of technology for the use of DME as a gas turbine fuel. The company succeeded in achieving Japan's first DME liquid phase combustion by incorporating a new fuel nozzle that it customized from an LPG liquid phase combustion nozzle. In the new nozzle, evaporation heat obtained by vaporizing a portion of DME is utilized to cool the fuel path. With a conventional fuel nozzle, maintaining DME in the liquid phase is difficult because the higher temperature in the fuel passage would partially vaporize it, making flow rate control impossible.
This problem of vapor lock is solved with the new nozzle, which is also compatible with liquefied natural gas (LNG), kerosene and light oil. It is therefore possible to keep DME in a liquid state by starting up the nozzle with LNG, kerosene or light oil, and switching the fuel to DME when its pressure is sufficiently high.