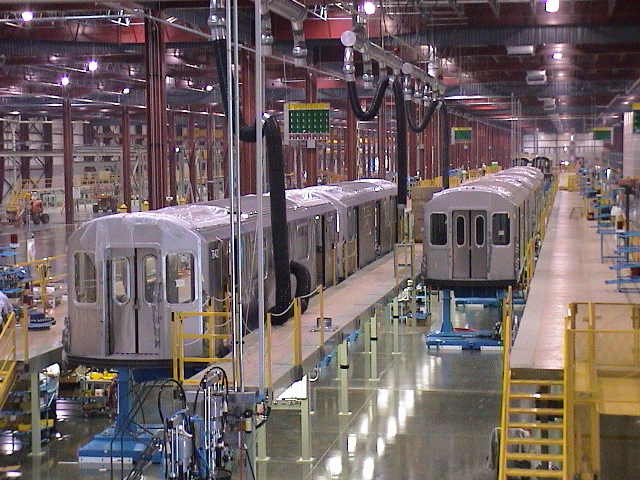 Kawasaki Motors Manufacturing Corp., U.S.A. (KMM) has partially started up its cutting-edge rolling stock factory in Lincoln, Nebraska. North America's only streamlined rolling stock assembly line, it is currently fitting out subway cars for New York City Transit (NYCT). Full assembly operations, from body fabrication to finished cars, are scheduled to begin in April, 2002.
The approximately 40,000 m2 factory is built on a 1.36 million m2 area, and houses a 480 m body fabrication line and a fitting-out line. All assembly work, from body fabrication to testing, painting and fitting out(interior work, piping, wiring, etc.) is arranged in a streamlined flow from the entrance to the exit of the new plant. The semi-finished cars move from one work station to the next on rubber-wheeled or air-elevated trucks, realizing a perfectly flat floor without rails. This also allows easy reconfiguration of the flow of semi-finished cars and components based on the type of cars to be manufactured next.
Railways are being reconsidered in the United States and other parts of the world as an environmentally friendly means of transportation. The new rolling stock factory marks a milestone in Kawasaki's pursuit of further growth in its rolling stock business.