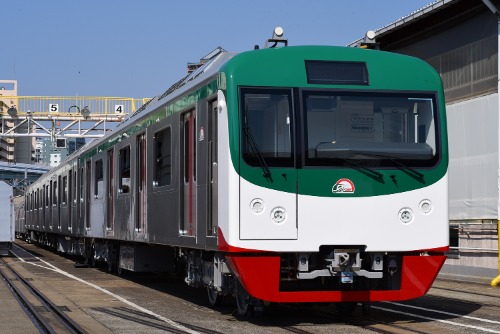 The inauguration ceremony of Dhaka Mass Rapid Transit (MRT) Line-6, the first MRT system developed in Bangladesh, was held on 28 December 2022, and the operation in the section of approx. 12 km called Phase 1 was started on that date.
In this ceremony, H.E. Sheikh Hasina, Honorable Prime Minister of the People’s Republic of Bangladesh, Mr. Obaidul Quader, Honorable Minister of Road Transport and Bridges, Mr. M.A.N. Siddique, Managing Director of Dhaka Mass Transit Company Limited (DMTCL), Mr. Kiminori Iwama, Ambassador of Japan to Bangladesh, Mr. Tomohide Ichiguchi, Chief Representative of Japan International Cooperation Agency (JICA) Bangladesh Office, and other high officials of the Government of Bangladesh made addresses and celebrated the inauguration of Dhaka MRT Line-6.
After the ceremony, the first train departed at the signal of the flag waved by the Prime Minister in Uttara North Station. Thereafter, the Prime Minister and other guests travelled by the second train to Agargaon Station, which is the final stop of Phase 1 section.
The operation of Phase 1 section for the public was commenced on 29 December 2022. It was reported in the news article in Bangladesh that people who desired to board a train formed queue in the length of approx. 2km, which represents the keen interest of the public in Bangladesh on Dhaka MRT Line-6.
The construction of Dhaka MRT Line-6 is progressing with Japan ODA Loan funded by JICA in accordance with the policy of the government of Japan enhancing the export of infrastructure systems. It is expected that MRT Line-6 will contribute to promote converting major transportation mode from road to rail and will eventually improve urban convenience, root out economic loss and alleviate greenhouse gas emissions. After the completion of construction of Phase 2 section, the entire route of the first MRT system in Bangladesh will reach 20km length comprising 16 stations.
Kawasaki will contribute to the development of economy as well as a safe and secure society in Bangladesh through supply of trains to Dhaka MRT Line-6.