This DF engine allows operators to flexibly alternate between the use of hydrogen fuel and conventional low-sulfur fuel oil. When hydrogen fuel is selected, the boil-off gas that evaporates naturally from the vessel’s liquefied hydrogen cargo tanks is used as the main fuel at a calorie-based ratio of 95% or higher*2 to generate electric power for the vessel, which results in a significant reduction of greenhouse gas emissions.

Kawasaki has a track record of selling more than 200 units of engines fueled solely by natural gas. To expand its product portfolio, Kawasaki developed combustion technologies tailored to hydrogen’s properties - a fast combustion speed, which often results in backfire, and a high combustion temperature - and in a demonstration test using a single-cylinder test engine, the company achieved stable combustion of hydrogen without causing abnormal combustion or the overheating of parts in the combustion chamber. Development of this engine was the result of its being selected as a Green Innovation Fund Project of the New Energy and Industrial Technology Development Organization (NEDO). Kawasaki intends to conduct a demonstration test of this engine after installing it on a large-scale liquefied hydrogen carrier which is planned to be commercialized in the mid-2020s.

As Kawasaki foresees a significant increase in the use of hydrogen energy in the future, which will play a vital role in achieving a decarbonized society, the company is developing a range of technologies for a hydrogen supply chain (production, transportation, storage, and utilization). The technology used for this engine serves the “transportation” and “utilization” stages, covering both the demand and supply aspects of the supply chain. Moving forward, Kawasaki will continue to develop more products that capitalize on hydrogen energy, contributing to the realization of carbon neutrality. 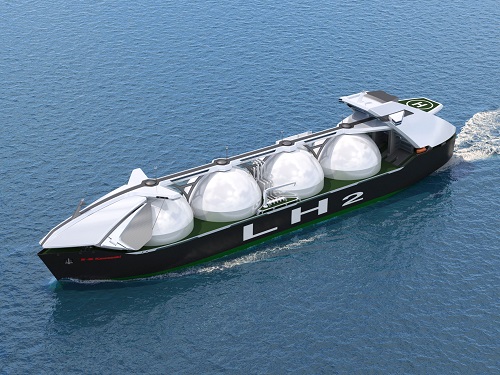