CRM training is intended to train not only the pilot, but also ground crew and other flight crew functioning in various capacities. The goals of Kawasaki’s new training services include improving team communication, situational assessment skills and decision-making skills, which enable safer flight operations. Starting from FY2022, air rescue teams throughout Japan require their personnel to take part in CRM training once per year in order to improve helicopter operation safety.
Kawasaki has developed a training system that takes advantage of space-sharing technology unique to VR in order to provide effective CRM training at a lower cost than training using an actual helicopter. This represents the first such attempt in Japan, as no such CRM training involving ground crew and flight crew has ever been undertaken domestically. Following the launch of training services, the company plans to carry out regular feature and system upgrades to meet the needs of a wide range of users.

The advantages of Kawasaki’s CRM training services are as follows:


Through helicopter manufacturing and training services, Kawasaki is contributing toward the realization of a world in which aircraft will be operated more safely and reliably. 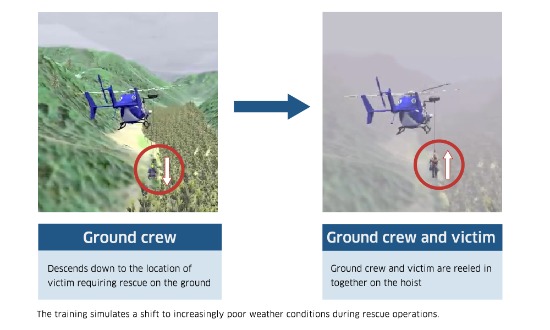