The liquefied hydrogen carrier that received the AiP is a large-sized vessel equipped with a cargo containment system (“CCS”) comprising four liquefied hydrogen tanks having a combined capacity of 160,000 m3. The CCS received its own AiP in April 2021. The carrier is designed to transport cryogenic liquefied hydrogen, cooled down to a temperature of –253°C and reduced to one eight-hundredth its initial volume, by sea in large amounts on each voyage, helping to reduce hydrogen supply costs. In order to build this large-sized carrier, Kawasaki leveraged design and shipbuilding technologies as well as safety-related technologies and knowledge utilized in the construction of the globally pioneering, 1,250 m3 liquefied hydrogen carrier SUISO FRONTIER,*1 while also calling upon its many years of experience in building liquefied natural gas (LNG) carriers and other liquefied-gas transport vessels.
This vessel’s AiP was issued by ClassNK following examinations to confirm that the vessel satisfies the IGC Code*2 and the International Maritime Organization (IMO) Interim Recommendations for Carriage of Liquefied Hydrogen in Bulk,*3 and also clears Class regulations as well as a risk assessment based on Hazard Identification Study (HAZID)*4 methods.
The main features of Kawasaki’s carrier are as follows.
(1) The vessel contains four 40,000 m3 liquefied hydrogen carrying tanks for a combined total capacity of 160,000 m3. These tanks utilize a newly developed, high-performance insulation system that minimizes boil-off gas (BOG), which occurs in response to heat ingress, in order to enable large-quantity transport of cryogenic liquefied hydrogen.
(2) The propulsion system includes a boiler and steam turbine plant capable of operating using hydrogen as fuel, and a dual-fuel propulsion system that makes use of natural BOG as fuel to power the ship. Utilizing hydrogen, which does not emit CO2 during combustion, as a fuel for propulsion contributes to reduced CO2 emissions from liquefied hydrogen transport operations. Furthermore, the vessel is equipped with a hydrogen-gas-fuel supply system comprising hydrogen gas compression equipment, hydrogen gas heat exchanger equipment and other components in order to enable supply of BOG from the CCS to the propulsion system.
(3) The vessel uses a cargo handling system designed to load large amounts of liquefied hydrogen onto the vessel in just a short time, and it is equipped with vacuum insulated double wall pipes in order to efficiently and safely transfer hydrogen in its cryogenic, liquefied state from onshore storage facilities to the vessel tanks minimizing vaporization.
(4) The hull and draft of the vessel were designed with consideration for the low specific gravity of the liquefied hydrogen cargo, and horsepower required for propulsion was kept low in response, resulting in higher-efficiency propulsion performance. Moreover, risk assessments were carried out for the vessel’s propulsion system, cargo handling system and other elements in relation to liquefied hydrogen, and suitable safety measures were implemented in response. This eliminates liquefied-hydrogen-caused risk to the ship’s crew, the ship environment, structural strength, and overall ship soundness while ensuring safety.
Kawasaki developed this vessel as part of a subsidized project by NEDO*5 and is currently carrying out more in-depth design with an eye to commercial operations starting in the mid-2020s. Amid global calls for the early achievement of carbon neutrality targets, the company is striving to achieve large-volume transport of liquefied hydrogen—for which demand is expected to grow as a clean energy source—in order to promote the use of hydrogen energy and thus help achieve decarbonization, working as one for the good of the planet.
Main Specifications of Kawasaki’s Large, 160,000 m3 Liquefied Hydrogen Carrier
Length: approx. 346 m; width: approx. 57 m; draft: 9.5 m
Cargo tank capacity: 160,000 m3 (40,000 m3 × 4 tanks, enabling carrying of approx. 10,000 tons of liquefied hydrogen) 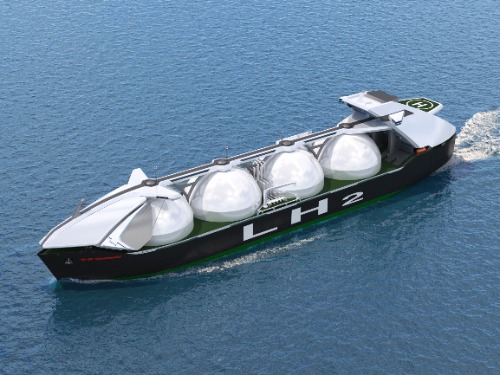 Simulated appearance of the completed 160,000 m3 liquefied hydrogen carrier
*1 Constructed by Kawasaki as a member of the CO2-free Hydrogen Energy Supply-chain Technology  Research Association (HySTRA; website: http://www.hystra.or.jp/en/), as part of the Demonstration Project for Establishment of Mass Hydrogen Marine Transportation Supply Chain Derived from Unused Brown Coal by the New Energy and Industrial Technology Development Organization (NEDO).
*2 International Code for the Construction and Equipment of Ships Carrying Liquefied Gases in Bulk. A set of international regulations governing the constructions and equipment of such ships. All ships that carry liquefied gases and that were built in or after 1986 are required to adhere to the code, and ClassNK incorporates the code as part of its Rules and Guidance for the Survey and Construction of Steel Ships.
*3 Provisional recommendations adopted by the IMO for bulk transport of liquefied hydrogen.
*4 Method of assessing risk, which is determined by experts based on the frequency with which potential hazards in a system arise, and aimed at identifying ways to minimize that frequency.
*5 NEDO Technology Development Project for Building a Hydrogen-based Society / Technology Development Project for Large-Scale Utilization of Hydrogen / Project for Enlargement of Liquefied Hydrogen Cargo Tank Facilities and Development of Unloading Terminal Equipment.
Related Links:
Kawasaki Develops Cargo Containment System for Large Liquefied Hydrogen Carrier with World's Highest Carrying Capacity—AiP Obtained from ClassNK (May 6, 2021)