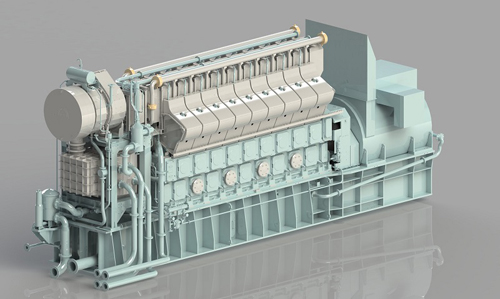 Tokyo, March 16, 2022 — Kawasaki Heavy Industries, Ltd. announced today that it has become the first gas engine manufacturer in Japan to develop combustion technology enabling stable operation by mixed combustion using natural gas and up to 30% hydrogen in large gas engines with a power generation output of 5 MW or higher.

Hydrogen has a faster combustion speed and higher combustion temperature than natural gas, leading to technical challenges such as abnormal combustion and overheating of combustion chamber components. Using its latest mixed-combustion technology, Kawasaki has built a system capable of controlling combustion conditions in response to factors such as power generation output and hydrogen content. During verification tests carried out using a single-cylinder unit with this system installed, the company confirmed stable operation during mixed-fuel combustion using hydrogen.

The company is currently developing a Kawasaki Green Gas Engine featuring hydrogen mixed-fuel combustion technology. The new model will be based on a conventional gas engine with minimal changes made to enable mixed-fuel combustion, including a mixing ratio control system of hydrogen and natural gas. This approach allows Kawasaki to build on its highly reliable gas engine with a track record of over 180 units sold ever since the first order was received in 2011. Compared to when only natural gas is used, mixed-fuel combustion using natural gas and 30% hydrogen reduces CO2 emissions by 1,000 tons per year.* The company plans to provide a commercial retrofit solution that will allow its gas engines currently in operation to accept a hydrogen content up to 30% and launch its hydrogen mixed-fuel model in 2025.

With the aim of further disseminating hydrogen-based energy in order to achieve a zero-carbon-emission society, Kawasaki is developing technologies for all phases of the hydrogen supply chain (production, transportation, storage and utilization). In the area of “utilization,” hydrogen gas engines are vital products that will make significant contributions toward the elimination of carbon emissions in Japan’s power generation industry, which accounts for roughly 40% of the nation’s CO2 emissions. Moving forward, Kawasaki will continue working toward the goal of carbon neutrality through applications of hydrogen-related technologies in currently operational Kawasaki gas engines and development of other new hydrogen-energy utilization methods.