Specifically, to further expand options for producing, transporting, and using fuel, the five companies intend to unite and pursue the three initiatives of 1) participating in races using carbon-neutral fuels, 2) exploring the use of hydrogen engines in two-wheeled and other vehicles, and 3) continuing to race using hydrogen engines. Toward achieving carbon neutrality, and in addition to advancing initiatives for electrification, by promoting further collaboration in producing, transporting, and using fuel in combination with internal combustion engines, the five companies aim to provide customers with greater choice.

Three initiatives for expanding the options for producing, transporting, and using fuel

Taking on the challenge of racing using a 1.5-liter SKYACTIV-D engine fueled with next-generation biodiesel (Mazda)

To achieve carbon neutrality, Mazda believes that it is important to provide customers with a variety of options. To do so, the company plans to expand its powertrain offerings by adding plug-in hybrid electric vehicle (PHEV) models to its current model lineup, which includes conventional hybrid electric vehicle (HEV), diesel engine, and battery electric vehicle (BEV) models. It also plans to enter the ST-Q class of the Super Taikyu Race in Okayama in its MAZDA SPIRIT RACING Bio concept DEMIO vehicle, which is equipped with a 1.5-liter SKYACTIV-D (diesel) engine that runs on 100 percent biomass-derived diesel fuel supplied by Euglena Co., Ltd. By repeatedly conducting verification tests in races, Mazda intends to increase the reliability of its technologies. Mazda intends to conduct verification tests in various environments and conditions to contribute to the expansion of the use of next-generation biodiesel fuel. 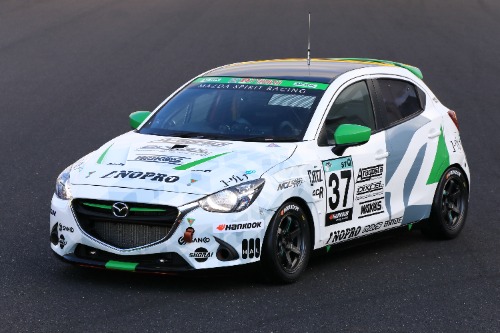 Toward the achievement of carbon neutrality, Subaru and Toyota are promoting efforts that include vehicle electrification, such as by introducing the jointly developed Subaru Solterra and Toyota bZ4X BEVs, which are scheduled for global launches in mid-2022.

To study new options, the two companies plan to enter and conduct verification tests of two new vehicles powered by carbon-neutral synthetic fuel derived from biomass in the ST-Q class of the 2022 season of the Super Taikyu Series. Specifically, Subaru intends to race in a Subaru BRZ-based vehicle and Toyota in a Toyota GR86-based vehicle. By collaborating and competing together in racing, the two companies plan to accelerate the development of technologies for all options and take on the challenge of achieving carbon neutrality.

Since 2010, Kawasaki Heavy Industries has been focusing on hydrogen as a next-generation energy source and has been developing technologies for producing, transporting, and using hydrogen throughout the entire supply chain needed to support society. The company is currently conducting verification tests for transporting large-quantity, low-cost hydrogen to Japan produced from Australian lignite. By the end of fiscal 2021, it plans to transport hydrogen using its in-house-constructed, first-in-the-world purpose-built liquefied hydrogen carrier, the Suiso Frontier. Also, based on hydrogen combustion technologies cultivated through the creation of the world’s first successful urban-area, 100 percent hydrogen-fueled gas turbine power generation technology for which it completed development in 2018, Kawasaki Heavy Industries is developing hydrogen-fueled engines for land, sea, and air mobility applications, such as for aircraft, ships, and two-wheeled vehicles.

Yamaha Motor is developing hydrogen engine technology for possible use in its two-wheeled vehicles, ROV (four-wheeled recreational off-highway vehicle) series, and other products. To accelerate this technology development, it is preparing to introduce new equipment and is strengthening its in-house development structure.

Kawasaki Heavy Industries and Yamaha Motor have started considerations toward the joint development of a hydrogen engine for possible use in two-wheeled vehicles. Going forward, they are planned to be joined by Honda Motor Co., Ltd. and Suzuki Motor Corporation, and the four companies intend to jointly explore the possibility of achieving carbon neutrality through the use of internal combustion engines in two-wheeled vehicles. To maintain a distinct line between cooperation and competition, they intend to proceed after establishing a framework that will clearly define areas of cooperation and collaborative research.

Toyota has been working with Yamaha Motor, Denso Corporation (Denso), and other related parties to develop a hydrogen engine since 2016*. It has entered a vehicle equipped with an under-development hydrogen engine in three races: the Fuji Super TEC 24 Hours Race, the Super Taikyu Race in Autopolis, and the SUZUKA S-TAI, and it has been working with companies and local governments to expand the options for producing, transporting, and using hydrogen. Toyota plans to also compete in the Super Taikyu Race in Okayama through a vehicle entered by ORC ROOKIE Racing, with Toyota President and CEO Akio Toyoda taking stints at the wheel in his “Morizo” driver persona. 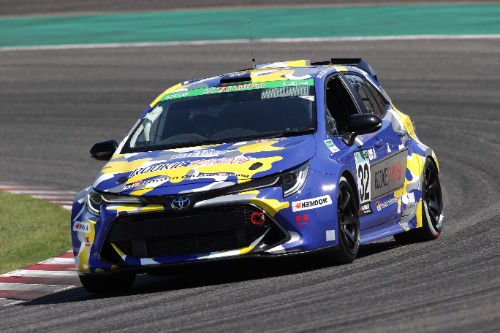 Hydrogen-engine vehicle during the SUZUKA S-TAI

In addition to the companies and municipalities that have supplied hydrogen for Toyota’s hydrogen-engine vehicle that has been competing in the Super Taikyu Series, Toyota is now collaborating with Fukuoka City, which is to supply Toyota hydrogen derived from sewage biogas. Since 2015 and as a world first, Fukuoka City has been taking on the challenge of producing and commercializing hydrogen from domestic wastewater sewage. The city is producing non-CO2-increasing green hydrogen from biogas generated during sewage treatment at the Fukuoka City Chubu Water Treatment Center and has a daily hydrogen production capacity of 3,300 Nm3 (which is roughly equivalent to the daily amount of hydrogen used by 60 units of the Toyota Mirai hydrogen fuel cell electric vehicle, based on a per-unit daily hydrogen requirement of 55 Nm3). The city is also conducting verification tests with corporate partners, such as supplying green hydrogen to fuel cell-powered trucks, motorcycles, and power supply vehicles. 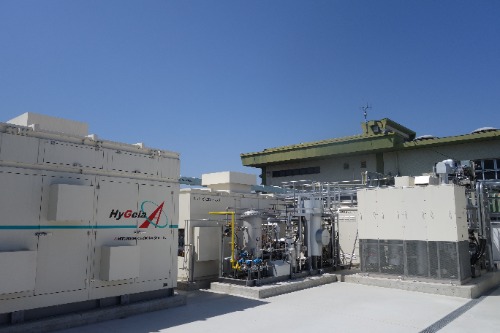 For the Super Taikyu Race in Okayama, hydrogen is to be transported using large trucks of Toyota Transportation Co., Ltd. fueled by Euglena's next-generation biofuel. Also, Toyota and Commercial Japan Partnership Technologies (CJPT) have started considering how to solve the transportation efficiency challenges of small fuel cell-powered trucks as identified at the SUZUKA S-TAI.


To overcome these challenges, Toyota and CJPT are employing CFRP (carbon fiber-reinforced plastic) tank resin-liner technologies developed through Toyota’s experience with the Mirai, making lightweight, high-pressure transport of hydrogen possible. The two companies are on the verge of significantly improving transportation efficiency compared to when using conventional metal tanks, and they are advancing development and considerations that should enable them to actually transport hydrogen in the future.

Toyota has advanced the speedy development of its hydrogen engine by competing in the harsh environment of motorsports in the form of the past three races of the Super Taikyu Series. Since the engine’s first Super Taikyu Series race, which was the Fuji Super TEC 24 Hours Race, improvements have been made to it after each race. In the six months leading up to the Super Taikyu Race in Okayama, its output has been improved by about 20 percent and torque by about 30 percent, and in the two months since the SUZUKA S-Tai, its output and torque have been improved by five percent to 10 percent, giving it performance superior to that of a similarly-sized gasoline engine. Meanwhile, fuel economy has been kept the same. (If output were to be set the same as that at the time of the Fuji Super TEC 24-hour race, fuel economy would improve by about 20 percent.)

The engine’s connected system, which was newly introduced during development before the SUZUKA S-Tai, has been improved to be able to process and analyze more data. Using the system in test runs further accelerated development, and increasing the pump pressure rating reduced hydrogen filling time to two minutes or less*.

To expand the options for achieving carbon neutrality, and to contribute to the creation of a better society while protecting jobs and livelihoods, the five companies plan to continue to synergize their strengths, deepen their collaboration, and actively promote the generation of new colleagues across industries.