Tokyo, November 1, 2021— Kawasaki Heavy Industries, Ltd (KHI) and Kawasaki Kisen Kaisha, Ltd. (“K” Line) announced today that they have concluded a co-development contract for “AI (Artificial Intelligence)-based Marine Machinery Operation Support System” (hereinafter referred to as “the System”) that is expected to be part of the core technology to achieve autonomous vessel operation in the future. The System will have such functions as failure prediction/ diagnostics, CBM (Condition-Based Maintenance), and optimum operation support, based on the data analytics of marine machinery operation data using AI.

In view of safer operations at sea, improvement of working environment for seafarers, and higher pressure for industrial competitiveness, the expectations for autonomous operations for ships is increasingly growing these days. Through this co-development project, they aim to complete the System by combining “K” Line’s extensive data on vessel operation and marine machinery operation collected from Kawasaki-Integrated Marine Solutions*1 and its years of experiences in operation and maintenance of onboard machinery, and KHI’s technology and expertise in building ships and propulsion plants, and by having AI learn these data and knowledge.

The System manages not only a specific piece of equipment but marine machinery onboard as a whole, including main engine and power generator. In developing the System, they will first target those vessels with diesel propulsion plants, and then those with various types of propulsion systems such as steam turbines and electronic propulsion systems in the next phase. The System will be beneficial for crew onboard as well as ship management personnel on land, providing useful information on failure predictions and failure diagnostics. This not only enables users to prevent major engine troubles from occurring but also assists planning effective maintenance schedule and advises optimum engine operation based on the condition of plants, ultimately to improve fuel consumption and to contribute to the greenhouse gas reduction.

Preferred Networks, Inc.,*2 known for their cutting-edge technologies on deep-learning and machine-learning, is joining the two companies in developing the “Marine AI,” the core of the System that executes failure prediction and operation condition diagnostics.

The Marine AI will be implemented both onboard and in the cloud system. The one onboard learns the vessel’s operation data and uses them to diagnose on a real-time basis. The one in the cloud system periodically collects the data accumulated on each vessel, and centrally uses them for further learning, allowing itself to become smarter and offer failure prediction and diagnostics as well as optimum operation support for any type of vessels. A proof-of-concept has been established for the core technology of the Marine AI for failure prediction and diagnostics. With abundant data collected from various ships via Kawasaki-Integrated Marine Solutions, as well as such data obtained from the latest sensors that were not available before, KHI and “K” Line will further proceed on developing the Marine AI that is versatile enough to be applied for any types of vessels. 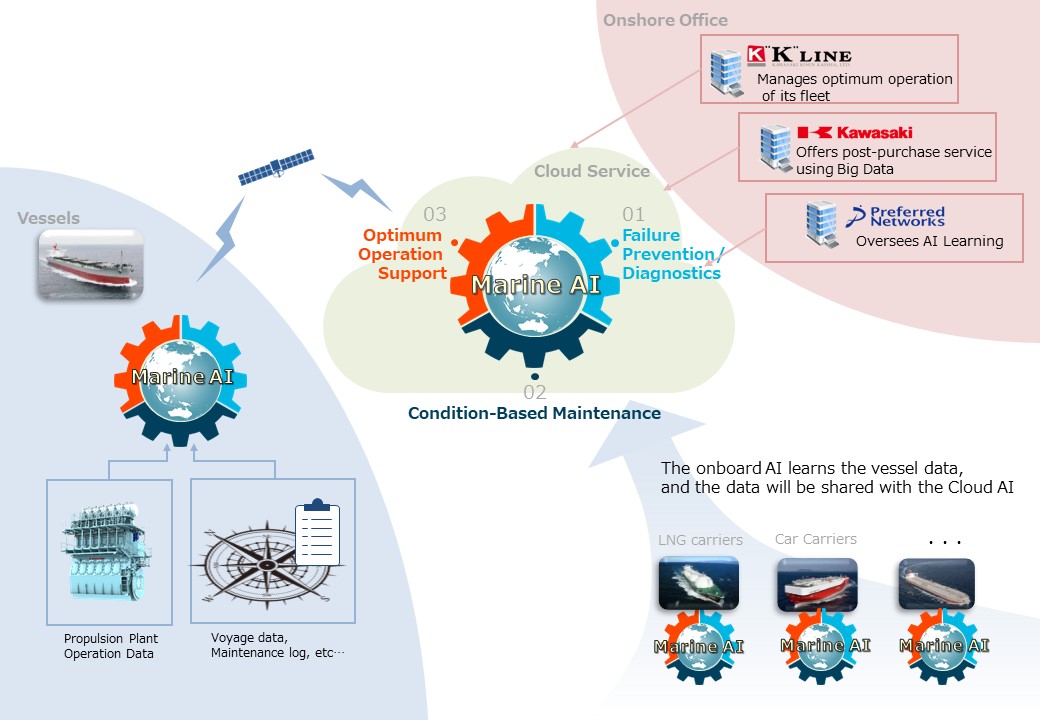 Both KHI and “K” Line are innovators, fully utilizing their expertise in shipbuilding and maritime transport, collaborating with entities from other industries with their special knowledge and technologies to accelerate system development so that they will achieve autonomous vessel operation for the future. KHI and “K” Line will contribute to accomplish safer operations at sea, improved working environment for seafarers, and higher competitiveness in the marine industry.