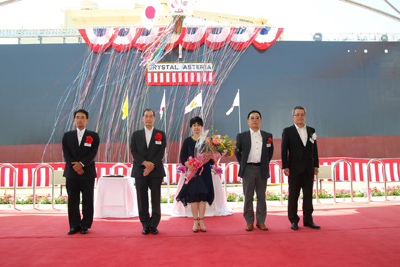 As the International Maritime Organization (IMO) is proceeding to strengthen its regulations on exhaust-gas emissions, LPG fuel is attracting attention as a clean alternative to heavy fuel oil, and the use of LPG as a fuel is accelerating, particularly in the LPG carrier market. This vessel is Japan's first LPG dual-fuel LPG carrier that can operate on both LPG and low-sulfur fuel oil, and is scheduled to be delivered within the year 2021.

Our company's electronically controlled LPG-injection diesel engine for marine application (ME-LGIP engine), the “Kawasaki-MAN B&W 7S60ME-C10.5-LGIP,” is employed as its main engine.
By using LPG as fuel, emissions of substances such as carbon dioxide and sulfur oxides in exhaust-gases can be reduced in comparison to the use of heavy fuel oil, and compliance can be achieved with the SOx (sulfur oxide) regulations*1 and EEDI Phase 3*2 required starting with vessels contracted for construction in 2022 and later.
Vessels powered by liquefied gas instead of heavy fuel oil have been progressively introduced throughout the world as an effective measure in response to exhaust-gas emission regulations for vessels. This vessel draws on the expertise that our group has gained in the past through the construction of LPG carriers as well as liquefied natural gas (LNG) carriers and LNG powered vessels.

We will continue to contribute to the realization of a low-carbon and decarbonized society by developing and providing environment-friendly marine technologies. These include various commercial vessels that comply with environmental regulations such as LPG powered LPG carriers, as well as carriers for liquefied hydrogen which is attracting attention as a next-generation energy source.