Tokyo, December 15, 2020 — Kawasaki Heavy Industries, Ltd. announced today its completion of a Kawasaki-MAN B&W 7S60ME-C10.5-LGIP engine, an LPG-powered marine diesel engine. It will be used in a large LPG*1 carrier being built at Sakaide Works for delivery to Kumiai Navigation (Pte) Ltd. This engine is the first MAN B&W S60 type LPG-powered engine to be produced in the world. 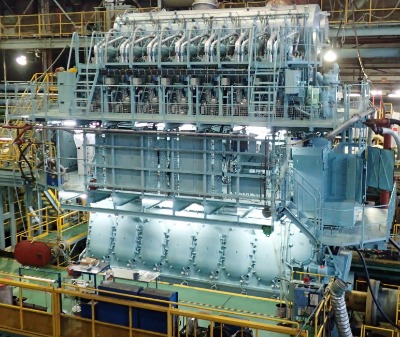 The International Maritime Organization (IMO) has been establishing stricter emission regulations for SOx, NOx, CO2 and other emissions in marine shipping throughout Europe, the United States and other parts of the world. LPG, which provides a clean-fuel alternative much like liquefied natural gas (LNG), has been the subject of increasing attention amid these changes. In response, Kawasaki is actively pursuing the sale and manufacture of Kawasaki-MAN B&W ME-LGIP engines as one of the next-generation main engines intended to help operators meet updated emission regulations.