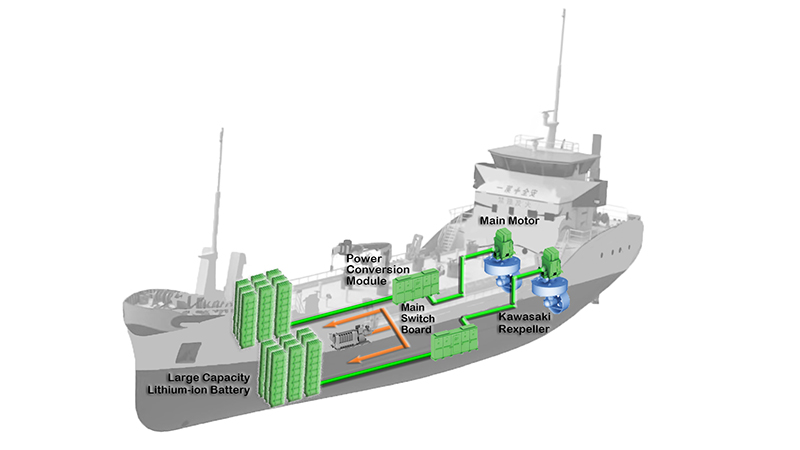 
Each Kawasaki battery propulsion system includes large-capacity lithium ion (Li-ion) marine batteries, a propulsion control system and an electric power management system. Kawasaki made full use of its expertise in the field of systems integration to realize a system that efficiently supplies power and electricity to the main propulsion system and auxiliary equipment, and irregularity monitoring and protective functions have also been provided to safeguard the entire system including the Li-ion batteries. In addition, Kawasaki utilized electric power system knowledge cultivated through experience in the generator field to make this system usable as an emergency power supply source*2 in the event of a large-scale natural disaster, thus providing support for the business continuity plans and the life continuity plans in the region.

As a marine equipment manufacturer and systems integrator, Kawasaki plans to continue focusing its efforts on the provision of systems in a package optimized for user operations.

*1 Zero-emission electrically propelled tankers planned and designed by e5 Lab Inc. for purposes of developing similar ships and promoting their widespread use. These two vessels in particular are slated for use in ship refueling operations within Tokyo Bay. The ships will be built by KOA SANGYO CO.,LTD. and  IMURA SHIPYARD CO.,LTD.
*2 This idea was originally proposed by e5 Lab and Asahi Tanker.