Kawasaki Launches Sales of New Gas Engine with World-leading Electrical Efficiency in Its Class of 51.0 Percent

Tokyo, June 18, 2020 — Kawasaki Heavy Industries, Ltd. announced today the completion of endurance testing and start of sales for their new-model KG-18-T gas engine, a newly developed product with a two-stage turbocharging system and the world-leading electrical efficiency in its class worldwide. It is added as a high-efficiency model to the Kawasaki Green Gas Engine lineup. 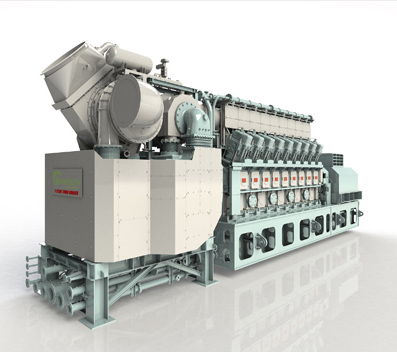 Since its first order in 2011, the original model that the KG-18-T is based on has sold over 180 units, and the latest model was developed to further boost its performance. The new model has an output of 7,800 kW at 50 Hz and 7,500 kW at 60 Hz and utilizes a newly developed two-stage turbocharging system to achieve a 1.5% increase in power generating efficiency compared with existing Kawasaki models, giving it a world-leading efficiency in its output class worldwide of 51.0%.*1 NOx emissions are kept to 200 ppm*2 or less, and it is designed to meet the environmental performance requirements demanded by many cities. Furthermore, it offers excellent fast startup performance enabling the maximum generation output within five minutes of start order, contributing to optimal adjustments in response to grid fluctuation.

With the spread of renewable energy and the diversification of power sources both in domestically and globally, the KG-18-T contributes to the dissemination of distributed power sources through its excellent economical, environmental-friendly, and fast startup performance.