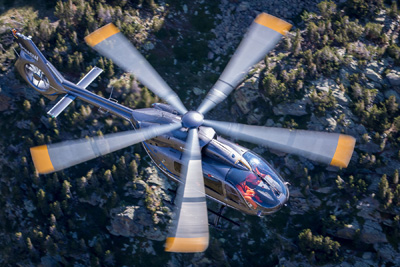 It was also announced that Central Helicopter Service Ltd., which operates 10 BK117 helicopters for EMS, disaster prevention operations and VIP transportations in Japan, will be the first customer to useH145//BK117 D-3 in Asia.

The BK117 D-3 features a 150 kg increase in useful load with a five main rotor blade system and shortened maintenance downtime, while inheriting features of preceding BK117 D-2 that has earned high acclaim, such as versatility, wide clamshell doors at the rear, outstanding hovering performance and low noise level.

The BK117 is a medium-sized, twin-engine helicopter used for various purposes, including emergency medical services, firefighting, disaster relief, law enforcement, broadcasting, and personnel and cargo transport. Following delivery of the first model in 1983, BK117 has been continually improved over the years, and thanks to the aircraft's outstanding technological strengths and high reliability, Kawasaki has successfully delivered 178 units as of March 5, 2019. Including those delivered by Airbus, This number exceeds 1,500 units worldwide, making it a global bestseller.

Moving forward, Kawasaki will continue making performance improvements to the BK117, and developing new equipment and component as needed. Furthermore, the company will leverage the strong customer trust fostered through past business operations, as well as the company's comprehensible customer support system encompassing everything from development to manufacturing, sales and after-sales services, in the pursuit of further business around the world.