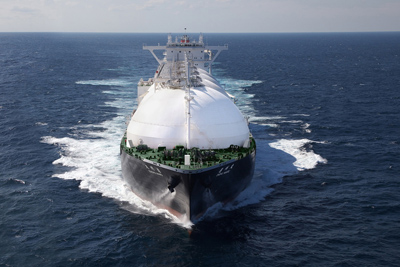 * Kawasaki Advanced Reheat Turbine Plant (Kawasaki URA Plant)
This steam turbine plant achieves a dramatic increase in thermal efficiency by utilizing a reheat cycle whereby steam that was used to drive the high-pressure turbine is returned to the boiler to be reheated before being sent back to the medium-pressure turbine. The first LNG carrier equipped with the Kawasaki Advanced Reheat Turbine Plant was commissioned in September 2011, and the steam turbine plant powering Kawasaki's latest LNG carrier has been further improved using data obtained through sea trials and actual operations using the first plant.