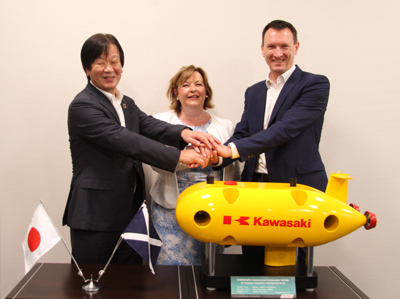 Tokyo, July 5, 2018 — Kawasaki Heavy Industries, Ltd. announced today that a basic agreement was reached with The Underwater Centre (TUC), a marine testing and training facility in Fort William, Scotland, UK, on conducting a verification test of a prototype AUV equipped with a robot arm for subsea pipeline inspection. The test, scheduled for October 2018, will be the first such test in the world.

With a focus on the growing demand for pipeline maintenance in offshore oil and gas fields, Kawasaki has been developing leading-edge component technologies for AUVs, based on sophisticated submarine technologies fostered in-house over many years. Aiming at commercialization in FY 2020, Kawasaki is currently developing an AUV capable of underwater charging and transferring of inspection data to the mother ship－features that allow for longer deployment time－while autonomously locating and tracking pipelines at close range, including those buried under seabed sediment.

In November 2017, Kawasaki successfully completed a verification test at TUC for automated underwater docking of a prototype AUV to its charging station, involving contactless charging and large-capacity optical communication.

For the upcoming test, leveraging on synergies of its technologies, Kawasaki plans to use a prototype AUV equipped with a robot arm with an attached inspection tool unit (currently under development), to achieve autonomous locating and tracking of subsea pipelines. The test will focus on verifying the robot arm’s capability to absorb the movement of the AUV due to tidal currents, and on verifying that the inspection tool unit can continuously track a pipeline under those conditions.

Scotland is a global leader in offshore development, innovating subsea technology for offshore oil and gas development. Reflecting the Scottish Government’s strong interest in this collaboration, the basic agreement with TUC was signed in the presence of the Scottish Cabinet Secretary for Culture, Tourism and External Affairs, Ms. Fiona Hyslop, who was visiting Japan. She gave an address, saying,
“The Scottish Government’s Subsea Action Plan, launched in January 2017 reflects our ambitions to support this important sector, not only in international oil and gas markets, but also to diversify into other sectors including renewables and deep-sea mining. I am delighted that Kawasaki Heavy Industries, Ltd, one of Japan’s major companies, has decided to develop this innovative technology in Scotland that surely meets our ambitions. It is fantastic news for The Underwater Centre in Fort William.” expressing her strong expectations for Kawasaki’s AUVs.

“The Underwater Centre has been really delighted to support KHI during the testing of their AUV in our seawater test site. We have built up a very good relationship over the development and delivery of the project and we look forward to welcoming them back to Fort William later this year and in future.”

The agreement also states that TUC will be collaborating with Kawasaki on future development of underwater vehicle technology. The agreement will advance Kawasaki’s commitment to further strengthening their partnership with the Scottish Government and TUC, in order to drive the development of technologies forward for AUVs and other underwater vehicles. 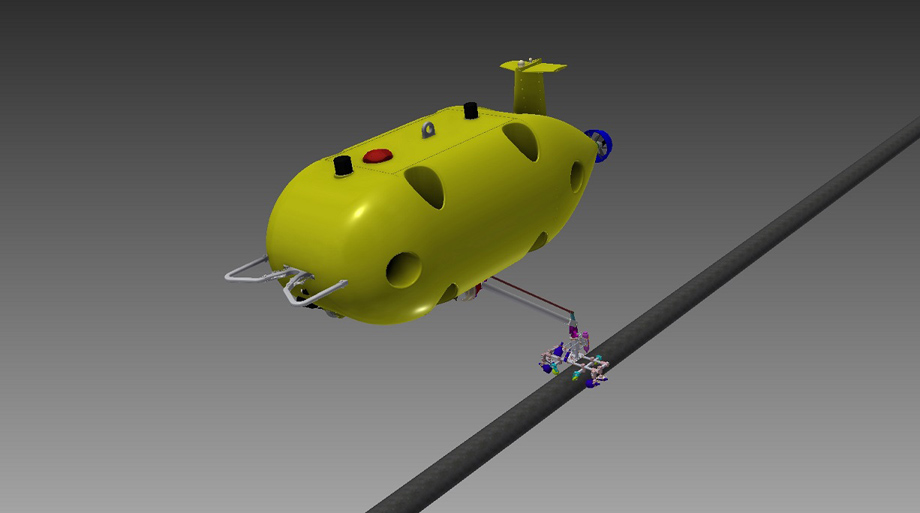