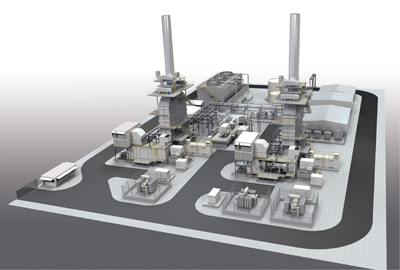 The newly developed CCPP is composed of two L30A gas turbines, two HRSGs, and one steam turbine, all produced by Kawasaki to make the CCPP a Kawasaki original power plant. Kawasaki brings together product technology and plant engineering capabilities cultivated over many years to achieve high efficiency in the combined cycle as a whole in addition to gas turbines alone*1. Total Electrical efficiency is 55.2% (reheat type*2) in the 100 MW class and 54.4% in the 90 MW class, both among the world’s highest levels of electrical efficiency.

Kawasaki has delivered more than 12,000 gas turbines for power generation, 67 HRSGs, and more than 370 steam turbines around the world, building reliability backed by vast experience and a strong track record.

The world’s electrical power consumption is expected to increase in the coming years, with much of the increase occurring in Southeast Asia, which is seeing rapid economic growth. In addition to conventional natural gas output, the number of new shale gas supplier countries other than the United States is expected to increase as well. As a result, demand for construction of gas-fired thermal power plants will grow, and the CCPP market is also anticipated to expand in terms of both capacity and regions. In the distributed energy system market, where power producers are introducing new facilities and updating existing ones at an increasing rate due to factors such as expanded use of unstable renewable energy sources, there are marked demands for highly efficient equipment and excellent load responsiveness. Kawasaki’s CCPP should be able to respond to those demands.

Kawasaki intends to continue to make full use of its sales offices throughout Europe and Asia as the company actively expands its global energy business.

*1
Some of the technologies for increasing efficiency and improving load responsiveness of L30A gas turbines were developed by the New Energy and Industrial Technology Development Organization’s (NEDO) Program for Strategic Innovative Energy Saving Technology.
*2
This is a reheat type CCPP, in which steam is extracted from the middle stage of a steam turbine and reheated in the reheater of an HRSG before being returned to the steam turbine in order to increase output.