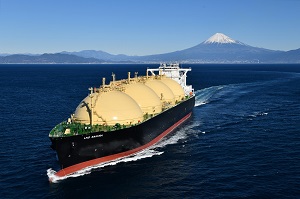 The first of Kawasaki's line of 177,000 m3 capacity LNG carriers to be commissioned, this ship is designed to enable passage through the newly expanded Panama Canal, which opened for full operations in 2016. The LNG SAKURA will be used by KEPCO to transport LNG procured via the Cove Point LNG Project in the U.S. The vessel features standard LNG carrier hull dimensions in order to enable docking at major LNG terminals around the world while offering larger cargo tanks for increased transport capacity, thus cutting LNG transport costs and facilitating more flexible LNG trade operations by shipowners.

Kawasaki has optimized the hull structure to decrease overall ship weight, enhanced the hull-shape design, and adopted a twin-propulsion motor, twin-screw propulsion system (the first of its kind in a large-size Kawasaki vessel), all of which help achieve the best propulsive performance possible. In addition, the company integrated a DFD electric propulsion system* for the first time in any Moss type LNG carrier worldwide, which increases fuel efficiency at all speeds.