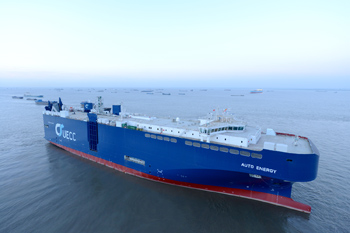 The Auto Energy is the second vessel of the world's first PCTC to use a dual-fuel engine (ME-GI engine) for both the main and auxiliary engines. In addition to the use of heavy fuel oil (marine gas oil) as fuel, this vessel can be run on liquefied natural gas (LNG), which is growing increasingly prominent as a clean energy alternative. The Auto Energy also meets exhaust gas regulations established by the International Maritime Organization (IMO).

In addition to building LNG-fueled transport vessels, Kawasaki plans to build LNG supply ships and also take advantage of the synergy achieved through coordinated application of the wide range of LNG-related technologies to actively pursue establishment of the supply chains necessary for the transition to widespread LNG fuel dissemination, with the aim of making LNG a primary fuel source throughout the commercial shipping industry.

Advantages Offered by the Auto Energy