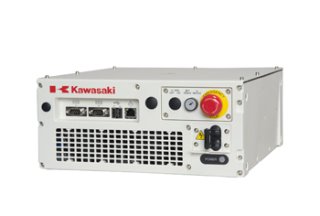 Kawasaki's E7 controllers, which have been used for compact, general-purpose robots RS003N, RS005N/L, RS006L and RS010N as well as medical/pharmaceutical robots MC004N and MS005N, and the D6 controllers, which have been used for semiconductor-manufacturing clean robots and the duAro dual-arm SCARA robots, are optimized for more specific applications. In contrast, the new F-series controllers, which were developed to meet increasingly high functional demands and can be used for a wider range of applications, feature compact dimensions coupled with high extensibility via enhanced coordination functions with external devices. The F series preserves the user friendliness seen in previous E7 and D6 series controllers while offering improved ease of maintenance, energy-saving performance and the most compact, lightweight controller design in the industry.

The new F series, along with the compact, energy-saving E series of controllers released on March 1, 2015, together serve as high-performance, compact-design controllers able to meet the needs of Kawasaki's entire robot lineup.

The new series' initial release will be the F60, which is designed for use with compact, general-purpose robots RS003N, RS005N/L, RS006L and RS010N as well as medical/pharmaceutical robots MC004N and MS005N. In the future, Kawasaki plans to expand this series' lineup to cover semiconductor-manufacturing clean robots and the duAro dual-arm SCARA robots.

1) Industry's Most Compact, Lightweight Design
Component integration and size and weight reductions, as well as component layout optimization, have resulted in an approximate 77% reduction in size and 72% reduction in weight for a much more compact overall design. This enables installation in 19-inch racks, stacked installation and other such arrangements, greatly reducing the space required for controller installation. Furthermore, the low 8.3-kilogram weight makes it easier for a single employee to carry the unit around. (The above figures are comparisons between the new F60 and the previous E7 series of controllers.)
2) Energy Savings
Regenerative energy produced via robot operations is reused to cut down on energy loss, and redesign of components and control reduce electricity consumption by the control circuit. These improvements and others result in a total energy reduction of more than 10% and contribute toward greater overall energy savings and lower CO2 emissions.
3) Universal Support
Formerly, there were different controller specifications to support the respective standards of Japan/Asia, Europe, and the U.S. Now, functional safety technology has been employed to adopt a common safety circuit. The new controllers have common global specifications that support the standards of every country.
4) Excellent Extensibility
With a highly extensible design enabling the addition of various optional features and functions, the F series is able to meet a wide range of user needs.
・Bluetooth interface can be built in, enabling connection using tablets and other devices without the need for additional settings/customization
・Possible to integrate a 2D vision system
・Possible to connect to a maximum of four 32-channel I/O units for remote I/O
・Possible to include an external motor control amplifier for up to two axes and Cubic-S safety monitoring function without sacrificing the unit's compact design