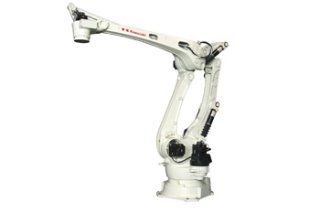 Tokyo, October 20, 2016 - Kawasaki Heavy Industries, Ltd. announced today that it will release its new CP700L high-speed palletizing robot on November 1, 2016. This latest addition to the CP lineup can transport up to 700 kg at once, giving it the highest payload capacity in the series.

The CP700L is designed to carry out logistics-related handling of cargo in boxes, bags and so forth. By using the same primary arm components as other CP-series palletizers and making the arm unit compact, the CP700L offers the industry's lightest weight (1,750 kg) while achieving a maximum payload of 700 kg. The control unit is the same compact, energy-saving controller seen in other CP-series products. By adopting this controller and its power regeneration function, which reuses energy generated during deceleration in palletizing operations, this palletizer achieves reduced energy consumption and CO2 emissions.

1) High throughput
The series has an enhanced drive mechanism for the arm rotation, which is key to speeding up palletizing work. It has the fastest throughput in the industry, 900 cycles/h. This allows faster process cycles, helping to speed up distribution.
2) Wide working range combined with a lightweight, compact design
The series has a wide working range which supports a stowage range of width 1,800 mm, depth 1,600 mm and height 2,200 mm. By using the same arm parts as those found in past CP-series palletizing robots that achieved a lightweight, compact final product, Kawasaki has brought the CP700L's weight down to 1,750 kg and reduced the rotation axis' interference area for a more compact installation footprint.
3) K-SPARC palletizing software (optional)
An operating program can be generated simply on a computer just by selecting the workpiece, pallet, and stowage pattern. Layout planning and operating simulation can also be performed, improving workability.
* When repeating a transport pattern of 400 mm upward movement, 2,000 mm horizontal movement and 400 mm downward movement