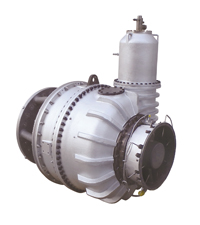 The delivery consisted of two natural-gas-fired GPB15 generator sets powered by M1A-13 gas turbines developed by Kawasaki. These were installed on Lima Flow Station, PHE ONWJ–manned platform consists of a production platform, a compression platform, a living quarter platform, three bridges and flare support structures located off the northern coast of Java as replacements for older power generation equipment, and PHE ONWJ plans to begin using the new GPB15 units at the end of 2016. The facility has been in production since the early 1970’s also as junction from other flow station which made Lima Flow Station as importance oil and gas production hub for PHE ONWJ. The platform was constructed in its offshore location as oil and gas production facility for extracting crude oil and gas from beneath the seabed as well as workers to handle these operations, and the new power-generating equipment is being installed to generate electricity for operation and production facility including lighting and so forth.

Kawasaki has already sold over 5,000 M1A gas turbines in Japan and abroad, earning widespread trust throughout the market. Based on deep customer trust in Kawasaki-developed gas turbines, founded on outstanding technological capabilities and an extensive track record of successful product deliveries, the company plans to further strengthen sales efforts targeting industrial users and customers in the oil and gas markets.