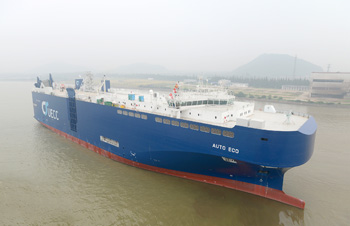 The Auto Eco is the world's first PCTC vessel to use a dual-fuel engine (ME-GI engine) for both the main and auxiliary engines, which can be run using either liquefied natural gas (LNG) or heavy fuel oil (marine gas oil). As regulations imposed by the International Maritime Organization (IMO) on various types of exhaust gas grow increasingly strict, Kawasaki is focusing on the building of a wide array of ships that run primarily on LNG in response to the predicted rise in global demand for LNG-fueled vessels. In addition to transport vessel construction, the company plans to build LNG supply ships and also take advantage of the synergy achieved through coordinated application of the wide range of LNG-related technologies possessed by the Kawasaki Group in order to establish the supply chains necessary for the transition to widespread LNG fuel dissemination. All of these measures are part of active efforts toward making LNG a primary fuel source throughout the commercial shipping industry.

Advantages Offered by the Auto Eco