Tokyo, December 24, 2015 - Kawasaki Heavy Industries, Ltd. announced today that it will establish an assembly line for the cargo doors of Boeing’s state-of-the-art commercial airplane, the 777X, at Kawasaki Motors Manufacturing Corp., U.S.A. (KMM), which is Kawasaki’s U.S. local subsidiary located in Lincoln, Nebraska. This is the first time for Kawasaki to establish an aerostructures production line in the U.S. The necessary equipment is scheduled for installation in the work area of about 2,800 square meters in the existing building prior to March 2017, so that the factory can start the operation from May 2017.

The 777X is the newest member of Boeing’s bestselling 777 family, the market-leading twin-engined large passenger airplane. Production is set to begin in 2017, with the first delivery targeted for 2020.

Kawasaki is engaging in the development and manufacturing of forward and mid fuselage panels, main landing gear wells, pressure bulkheads and cargo doors for the 777X. For the assembly work of the cargo door at the Lincoln factory, Kawasaki will use an automatic riveter and a painting robot developed in-house to enhance the automation and speed of production and ensure high quality, thereby increasing the efficiency in production.

The Lincoln factory began its operation with the production of motorcycles in 1974, as a factory of Kawasaki Motors Corp., U.S.A. (and thereafter came under the control of KMM in 1981, when KMM was founded). The factory currently produces, among others, all-terrain vehicles, the Jet Ski*1 personal watercraft, and railway vehicles. The factory has introduced the Kawasaki Production Systems (KPS) *2, Kawasaki’s original production systems developed through mass-production activities over many years. It will extend these systems to the production of aerostructures as well.

The steady growth of demand is anticipated to continue in the worldwide commercial airplane market. Taking this opportunity to establish an assembly line for the Boeing 777X’s cargo doors, Kawasaki designates the Lincoln factory as its aerostructure manufacturing base in the U.S. and will actively pursue the expansion of its commercial aircraft business as well as the growth of KMM.

*1
Jet Ski is a registered trademark of Kawasaki Heavy Industries.
*2
The Kawasaki Production Systems (KPS)
Based on the Just In Time Systems, these systems use Kawasaki's proprietary logical production management techniques, which were developed and tested in-house by applying them on production lines, and which can be implemented in any production line, regardless of whether it is a mass-production or single-production line.
*3
Produced at the Maryville Plant in Missouri. 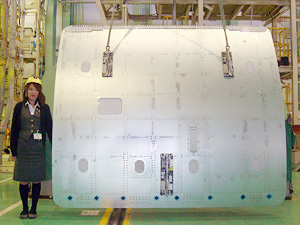 cargo door for the Boeing 777 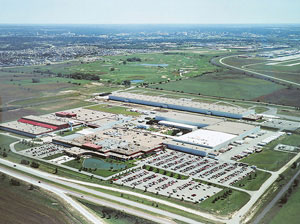