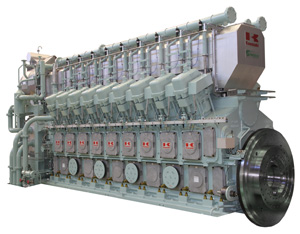 Tokyo, December 2, 2015 – Kawasaki Heavy Industries, Ltd. announced today that it has received an order for a 15,000 kW cogeneration system from Tokyo Gas Engineering Solutions Corporation, a wholly-owned subsidiary of Tokyo Gas Co., Ltd. The cogeneration system will be fitted with two Kawasaki Green Gas Engines and installed at the Shinjuku District Heating and Cooling Center in Tokyo, one of the world largest facilities of its kind.

Both of the system’s engines will be the KG-18 series of Kawasaki's proprietary Green Gas Engines, the most efficient in the world, boasting an electrical output of 7,800 kW. Once installed on the second basement level of the Shinjuku District Heating and Cooling Center, the system will supply electricity to the Center as well as the Shinjuku Park Tower building while its waste heat is used as a heat source for district heating and cooling. Kawasaki will oversee the entire construction project, including design of the system as well as supply and installation of power generation equipment. The system is slated to be put into operation in 2017.

This latest order is a testament to the unsurpassed efficiency of the Kawasaki Green Gas Engine as well as its superior economic and environmental performance that meets the toughest NOx emissions standard in the world.

Tokyo Gas Engineering Solutions’ Shinjuku District Heating and Cooling Center, the largest system of its type anywhere in the world, supplies heat for heating, cooling, and hot water via its pipe network linking it to the Tokyo Metropolitan Government Building, high-rise buildings, hotels, and more all located in Tokyo's Shinjuku Shintoshin district. The Center has already been using a gas turbine cogeneration system to supply electricity to the Tokyo Metropolitan Government Building since December 2012. The new additional cogeneration system will enable it to leverage multiple power sources to provide a steady supply of electricity that will meet the needs of the surrounding area. It will also facilitate the building of a highly efficient heat and electric energy supply plant with the outstanding environmental performance needed to enhance the smart energy network.

Since being selected as the host city for the 2020 Olympic Games, Tokyo has seen an increasing number of area redevelopment projects. Kawasaki is doing its part by helping to save energy and enhance energy security with its Kawasaki Green Gas Engines as well as other power generation and cogeneration systems.